30th December 2010
We spent the day in Ikebukuro, and Akihabara looking at the shops, the crowds and the computer and Cosplay crowds. Each doorway has a rice stalk decoration for New Year. Here are some examples 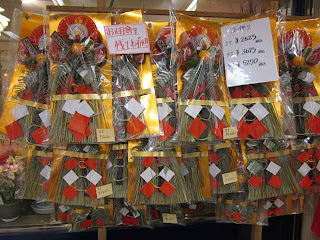 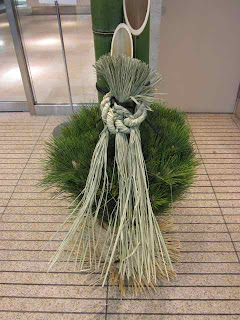 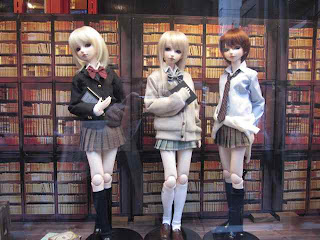 Here are some of the dolls dressed as characters in Japanese comics or  Manga. 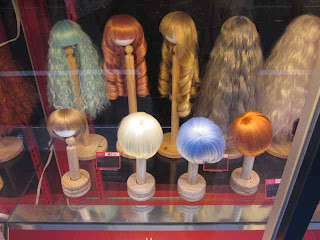 If you want to get a new hairstyle for your doll. 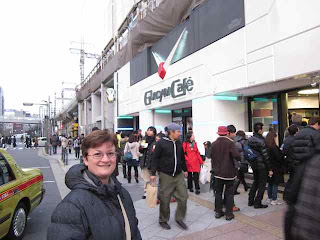 Here I am outside the Gundam Cafe in Akihabara 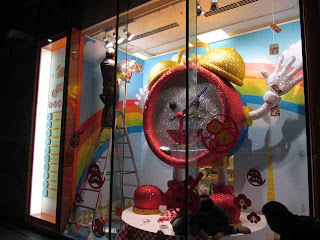 Getting ready to count down the New Year in Ginza with a giant sparkly clock.
Posted by Clare Smith at 4:38 PM 1 comment:

Here we are in Tokyo, It is pretty cold and very quiet. The airport wasn:t buzzing with tourists like it usually is and the locals are getting ready for New Year so are getting ready to go home to spend time with their families. We came straight to our guesthouse from the airport so havent been anywhere much yet but it is great to be back in japan. This time I have brought my laptop so can load photos onto the blog as we travel around instead of doing it retrospectively when I get home. Our Guesthouse is a little gem. It is called Family Inn Saiko and the owners invited all the guests to eat a meal with them last night which was fantastic as we had just arrived after a 10 hour flight and didnt want to go looking for food at the convenience store.
We stayed there 8 days altogether and thoroughly recommend the place. Although it is a little far  from the station, it is wonderful to stay in such a friendly place and nice to be there over New Year.
Posted by Clare Smith at 3:47 PM No comments:

Hi everyone
If you are in New Zealand don't forget to enter your quilt for the Quilt Symposium exhibitions. I had completely forgotten about them till someone mentioned that the deadline for entries is 14th of January. This is right in the middle of the New Zealand Christmas break so it is easy to miss.

Minerva Gallery still has the Cash and Carry exhibition 'Something Special' on till Christmas Eve.

I've been finishing off quilts to try and see if I have anything suitable for the Symposium exhibition but got distracted by this book:
A Glimpse of Eternal Snows by Jane Wilson-Howarth.

It is the story of an English family and how they brought their children up in Nepal. One of the children had severe medical problems and I found it fascinating to see that this seemed less of a problem in Nepal where people accept that not everything can be cured, than it had in the UK where doctors were constantly trying to test for various 'syndromes'.

Music and Bike rides
It is school holidays here till the end of January. Number one son is into free jazz, Japanese Noise music and is currently experimenting with trying to wire up a bell to make nasty twangy noises which he can record. I just hope he is using batteries and not mains power. Then I have to transport his whole drum kit into Wellington for a 'gig'.
Number two son is preparing for a major bike ride for the Duke of Edinburgh award, and I get to be 'shadow party' so for three days I have to follow them around the Wairarapa in the car. Hope it stops raining soon.

Due to my employment as a taxi driver, very little is actually being made...
Posted by Clare Smith at 2:31 PM No comments:

Today's favourite blog is Needleprint which is a blog about needlepoint samplers. I really covet the perpetual diary but am trying to limit the number of credit card purchases after we went over our credit card limit yesterday - eek!

Today I have two teenagers in the lounge playing StarWars on the Playstation. One in the kitchen getting a cooking lesson as part of his Queen's Scout Award and another playing drums in the bedroom. They aren't all mine however.

Whats on this weekend?
Craft 2.0 at the Dowse gallery

Chronicles of Narnia: Voyage of the Dawn Treader
Lots of very nice costumes in beautiful fabrics.

Enriching Fashion: An Eye For Detail

Come and take a closer look at some of the distinctive, exquisite details in fashion with Enriching Fashion: An Eye For Detail, on at the Eyelights Gallery in Te Papa from 17 September 2010 - 26 August 2011.
Posted by Clare Smith at 7:18 PM No comments:

The Textile Blog is a great place to find out all sorts of textile information. I was looking for lace when I stumbled upon it. I'm currently looking at Reticella lace and a modern version - Guipure. The Reticella lace is what Elizabethan ruffs were decorated with.
Posted by Clare Smith at 7:04 PM No comments:

Not sure if anyone reads this blog. I am not the best at updating it.
I have been accepted for a one year course in Costume Construction next year at the drama school here in Wellington. I am really looking forward to it. In the meantime I am getting another chance to go to japan, this time from December 29th to late January. Carefully timed to take in the Tokyo Quilt Show. There is a small group of people from Wellington going over for the quilt show and I will catch up with them in Tokyo after staying in Tokyo, Kyoto and Okinawa with the family.
In case anyone else wants to go , you don't have to stay at the Tokyo Dome hotel, there are other cheaper hotels in the area.
Posted by Clare Smith at 12:57 AM 2 comments: