I'm supposed to be making a class sample for my Modern Quilt design class at the New Zealand Quilt Symposium, January next year. Instead I am finding all sorts of other things to do. I have walked my mothers dog and given her cat its thyroid pills. I have visited a friend to get information about some costume work (ballet costumes). I have made some samples for an online course I am taking, and I plan to take my son for a driving lesson before taking my mothers cat to the vet. This morning I spent most of the morning with my mouth open, (at the dentist). It is amazing how easy it is to find other things to do.

It is a year since I completed my GraduateDiploma at Whitireia , and it is thanks to whitireia that I have the exhibition at Objectspace which is my prize for getting 'Best of show' at the graduating exhibition last year. Although I haven't completed much work this year I have been featured in two magazines and had my work written up in another. They are
Textile Fibre Forum magazine from Australia issue110, 2013
Down Under Textiles also from Australia, current issue
newZealand Quilter, current issue
I also won theBernina prize at 'Changing Threads' exhibition in Nelson.
So many thanks to Whitireia NewZealand, Bernina New Zealand, and the magazines.
Now I just have to settle down to work again, I have been re consolidating, working out direction, dealing with family sickness and travelling this year. Next year I hope to get making!
Every time I study art in any way, it always takes me at least a year to get over it, and find my own path again.
But before I can do anything I need to make class samples for the New ZealandQuiltSymposium2014 and make a commission which is needed as a Christmas present. 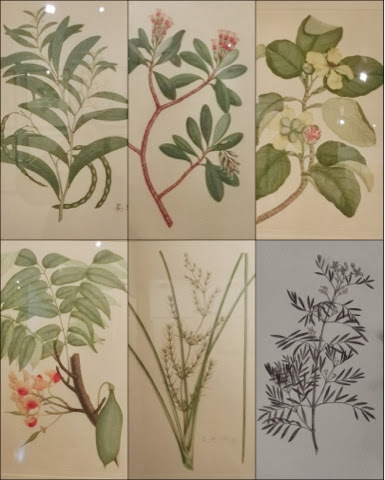 from an exhibition currently being held in Geelong of lithographs of botanical samples from Joseph Banks explorations of Australia.
Posted by Clare Smith at 6:45 PM 1 comment:

On my way back from Melbourne I stopped in Auckland to help hang my exhibition  at Objectspace, which is at 8 Ponsonby Rd, Auckland.
Daily photos of the dyeing in progress will be on the Objectspace facebook page

It is a very minimalist exhibition, just three wallhangings but it is a lovely gallery with really nice natural light and the work can be seen through the window of the gallery even when it is closed.


The exhibition is on for 4 weeks and more dye will be added each day.

My work investigates the relationship between commerce, the environment and the damaging effects of ‘the race to the bottom’, where the consumer and importer demand the lowest price and the manufacturer is forced to cut corners to secure a profit.

Water treatment is expensive and rivers in textile manufacturing countries,  run blue or pink or turquoise with waste-water run-off from the textile industry. The dyes are so strong that it is possible to predict fashionable colours for the seasons ahead by looking at Googlearth.

The graffiti is amazing in Melbourne, it seems that in some areas it isn't illegal to grafiti.  Fitzroy is the best but the lane ways in the CBD are pretty good too. Here is just a taster of what was on on the walls in November 2013. 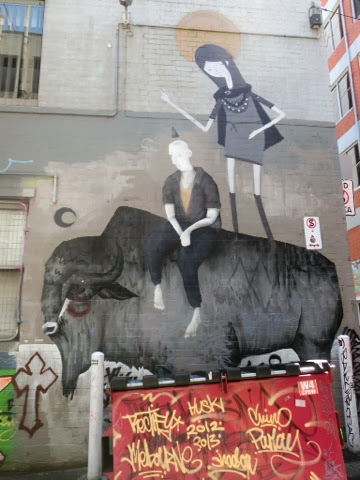 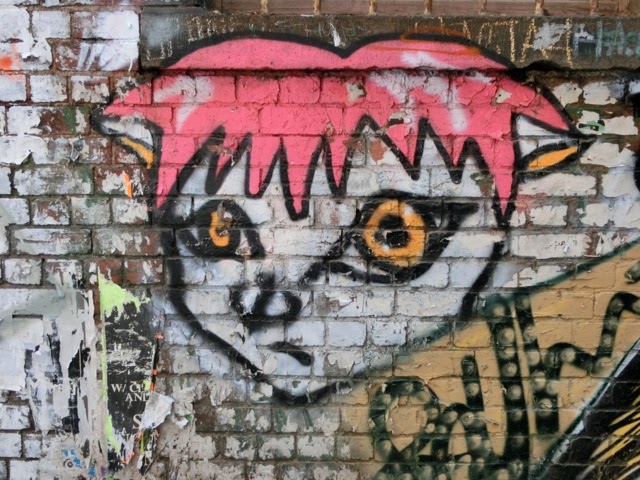 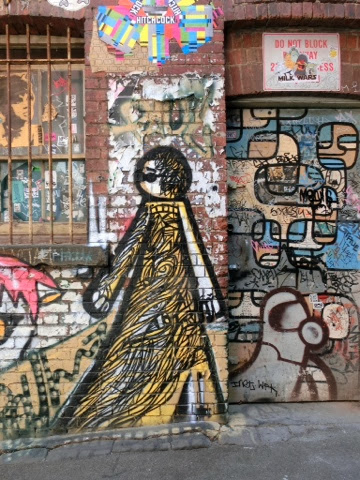 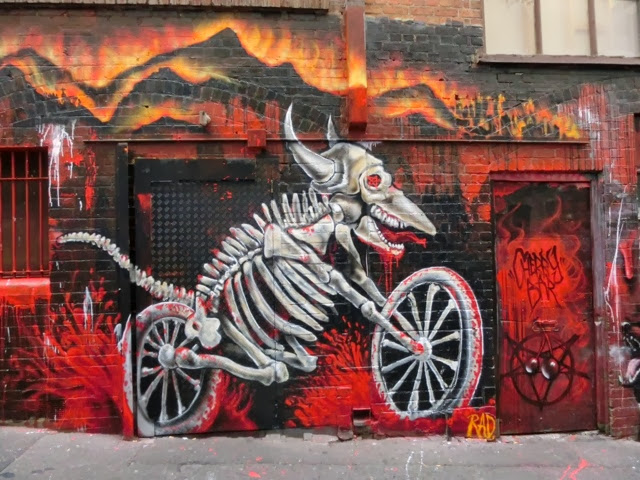 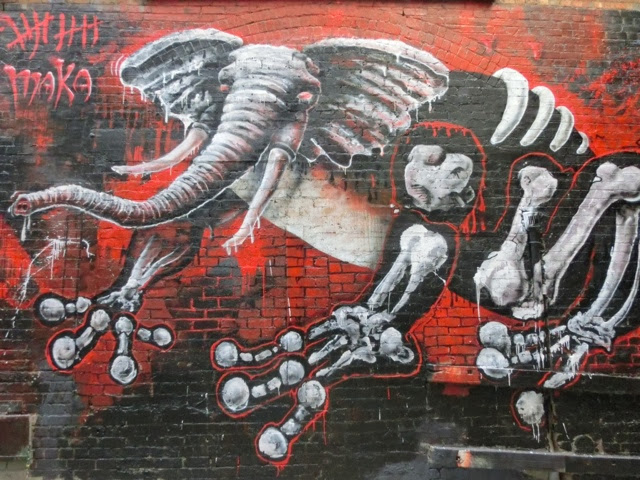 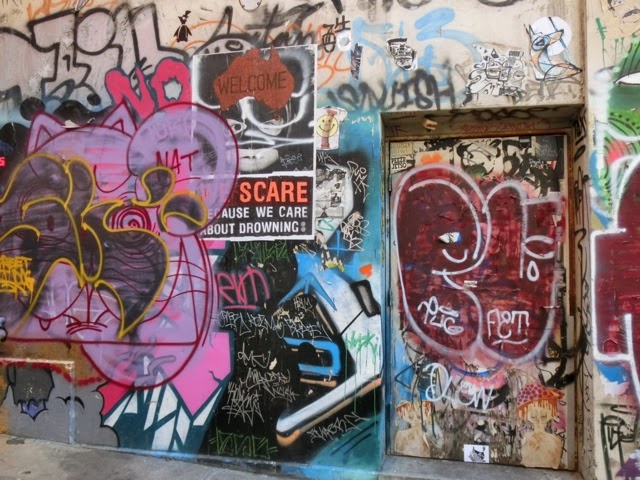 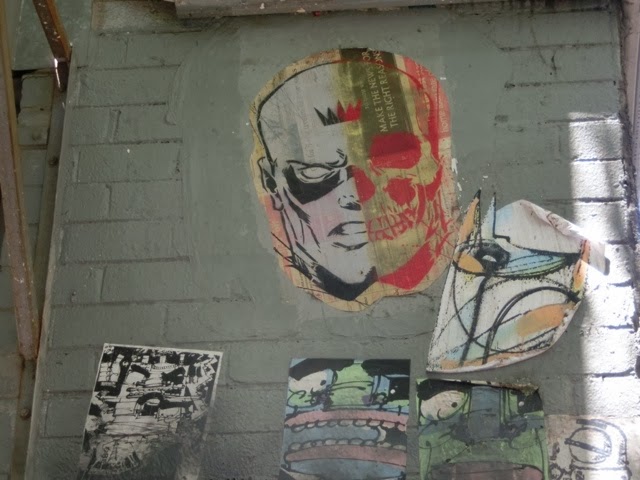 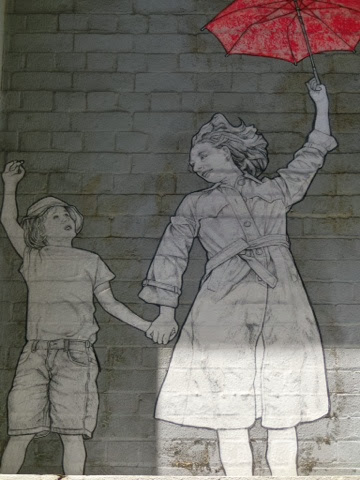 This might be more of a mural than grafiti, I'm not sure but I liked it. 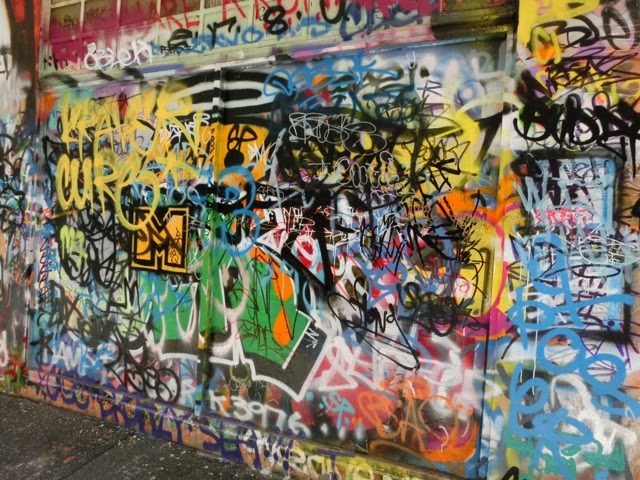 Ok this is fairly messy but an interesting texture. I prefer the paper cut outs 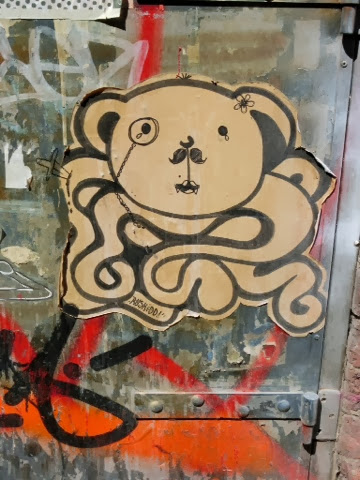 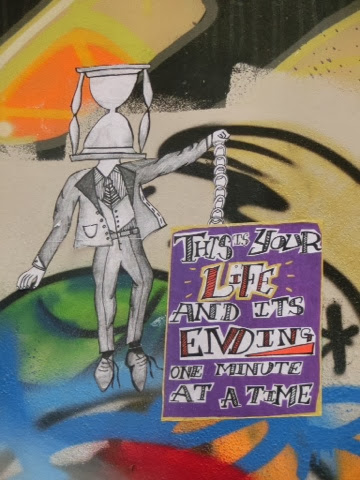 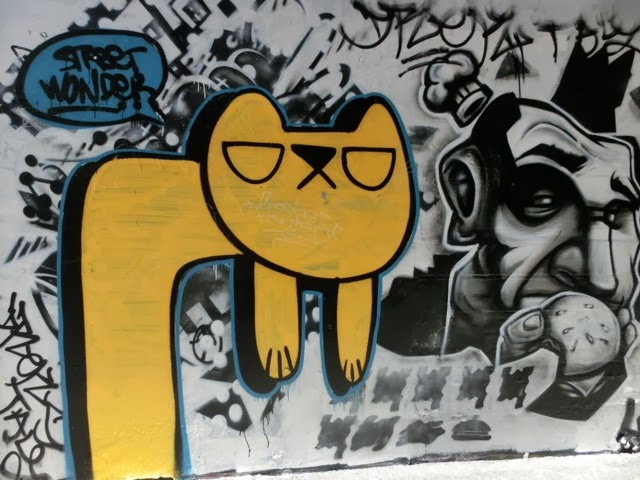 I have a lot more photos but need to sort and crop a few. Maybe censor some ... 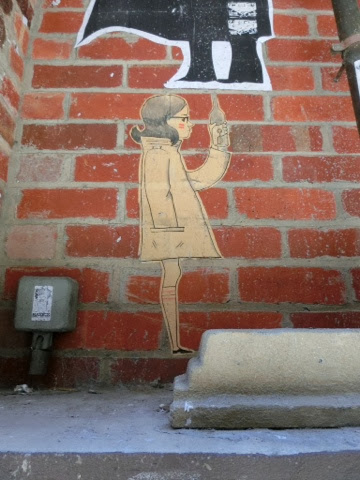 And then the sun came out in Melbourne!

It was cold and rainy this morning but now it is glorious and this is the view from our window now that there is sun. 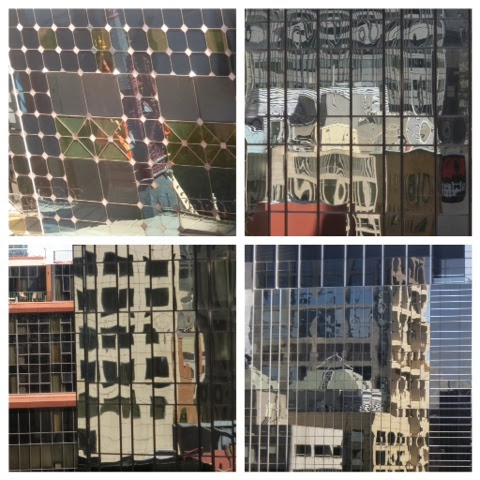 I walked up Collins Stand then caught the tram (112) to Brunswick st, Fitzroy which is surely the centre of all things arty and cute, as well as having great fabric shops and graffiti. 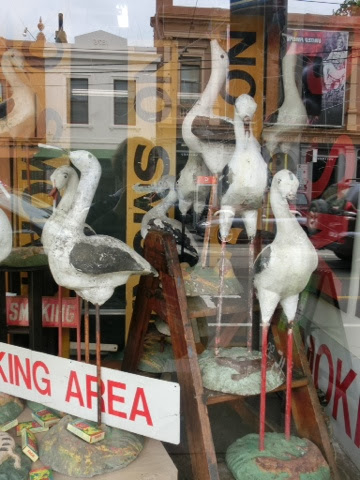 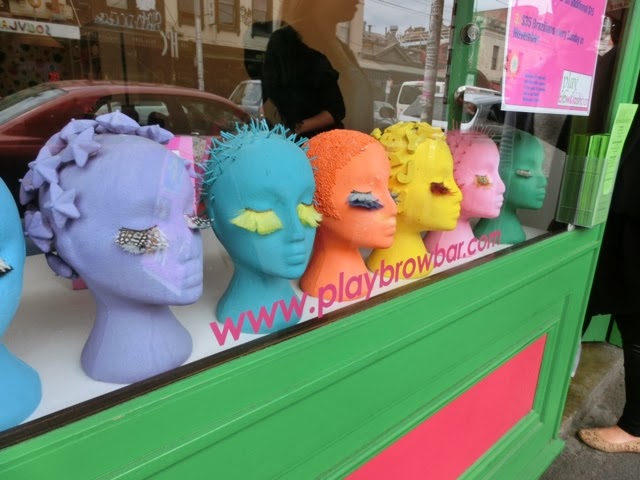 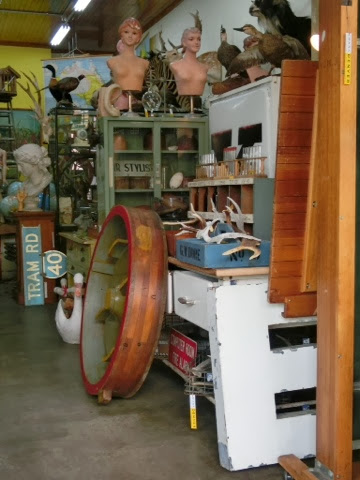 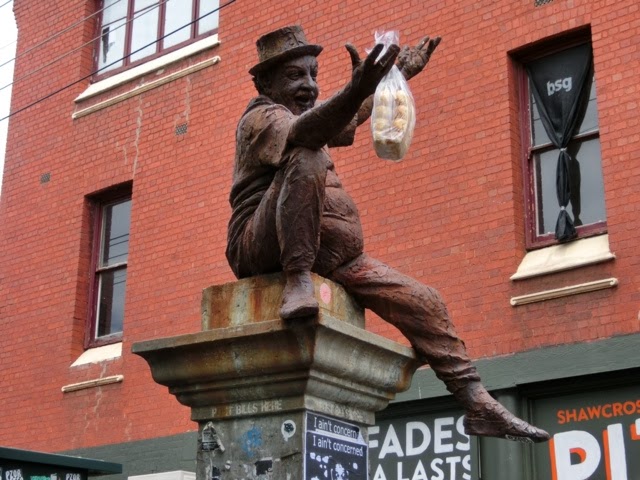 Someone gave this fella a bag of bread rolls.
I came across the silk shop I was looking for, completely by accident. I saw graffiti first then the sign for a knitting mill and then realised the 'Beautiful Silks' sign was right next to it. 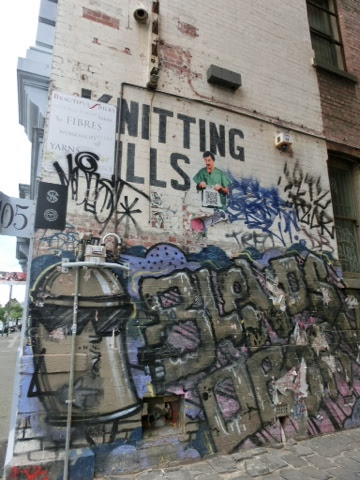 Beautiful silks have everything silky that a crafts person might need. Knitting wool/silk, stuff for felting, fabrics, and threads, as well as silk scarf blanks. They run workshops there too but there is nothing on this weekend that I could do. 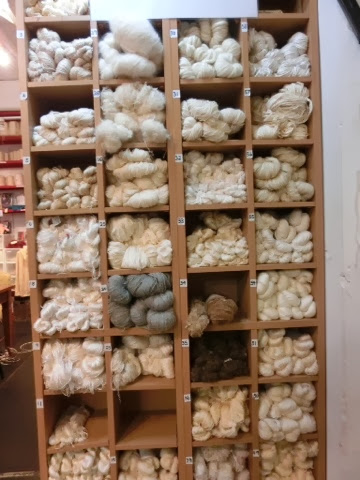 Silk threads for dyeing.
Back on Colins st, I saw this bike trailer with fake cyclists whose legs go round and round when the trailer moves. 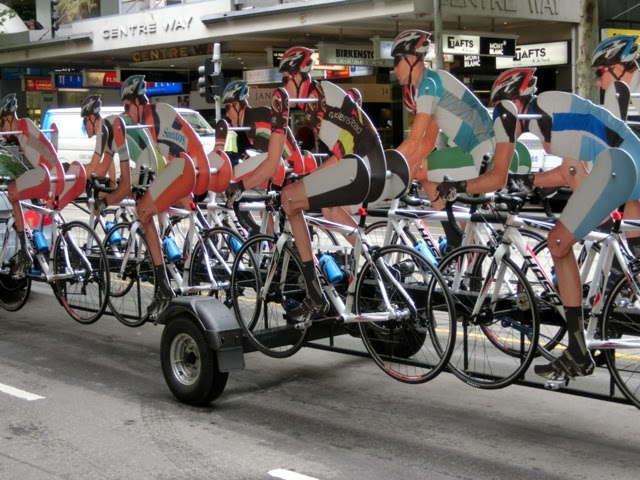 And an exhibition called 'The art trail' Bundeena and Maianbar, at the ChinaConstruction bank on Collins. This picture made of aluminium coke cans was stunning. It is by Liz Borghero. 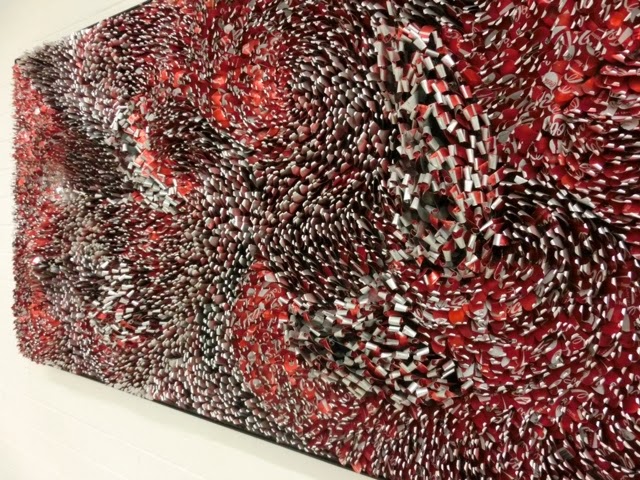 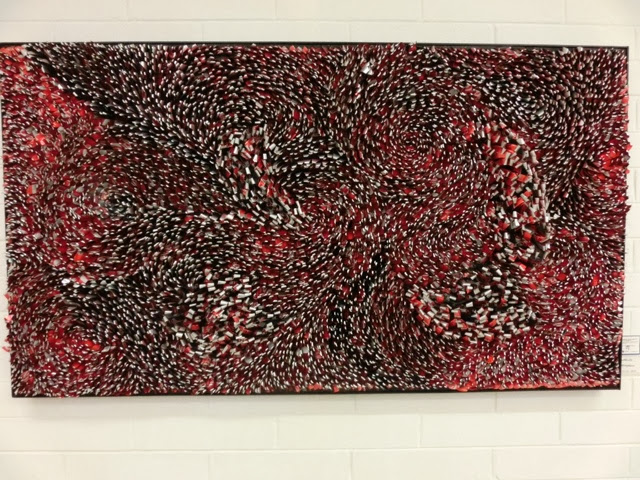 Now I just have to work out how to get to the Sandringham yacht club rooms by 7pm. Apparently it is nowhere near the station.
Posted by Clare Smith at 9:36 PM No comments:

This week I am in Australia. I spent 3 days staying in Geelong with Dijanne Cevaal, machine quilter extraordinaire! Now I am in Central Melbourne, where my husband will be giving a lecture tomorrow. We are staying in a pretty amazing place on Collins st on the 12th floor which has a view out of the window showing a wide range of architectural styles. The hotel we face is the Intercontinental ( it has a chocolate shop right in front too which is hard to resist). Behind that are high rise with all different window shapes and sizes and wonderful reflections. To the left middle is a building with windows that are a snowball quilt pattern. I might get a better shot tomorrow. 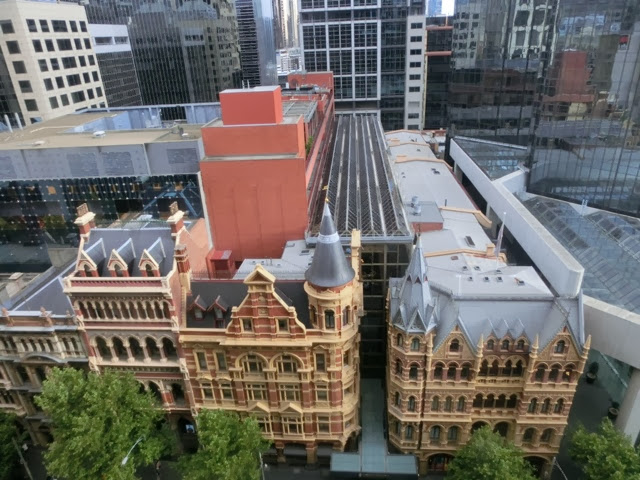 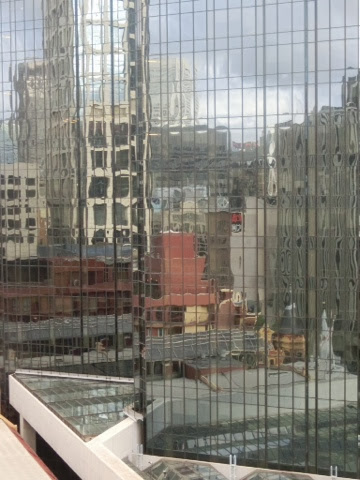 This looks like a watercolour painting with all the reflections.
Dijanne took me to some of the galleries in Geelong. Including Geelong gallery which has a great exhibition of prints at the moment. A really good place to visit is a shop called 'A Piece of Cloth' which has vintage textiles from the 1800s to 1970s. The owner is a textile designer, and the address is
studio 9-100 Lower Paper Mill road, Fyansford, VIC 3221. Tel 0416052585
Www.apieceofcloth.com.au
Hours are 10-4 pm Wednesday to Saturday
It might be a bit hard to get to if you didn't have a car, but I believe they often have stalls at quilt shows and textile fibre forums. It is a great place to fossick and I bought a jacket made of recycled Indian saris which I couldn't resist. The jackets are from a social enterprise project in India run by Fiona Wright who also runs textile tours in Europe and India.
Here is a picture of the jacket fabric - yum! 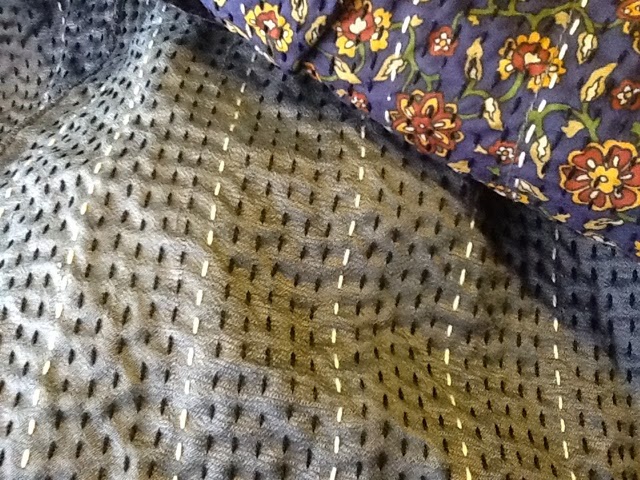 Tomorrow I am off to ' Beautiful Silks' in Fitzroy.
Geelong quilters show is on the weekend after next, 23-24 th of November. Sorry not to include the links, I am scared that if I leave this page to find them I will lose the wifi.
Posted by Clare Smith at 12:10 AM No comments:

Well after two days of  the arts trail there were certain trends we noticed.

On Saturday morning there were lots of women in groups of friends, they spent up large egged on by their friends.

On Saturday afternoon there were married couples who didn't buy much because they had to clear it with each other .

On Sunday everyone seemed to have come out with no money on them.

There were also quite a few rest home residents, often with adult children and grandchildren with them. Quite a nice way to spend an afternoon really.

I think it was worth being part of the arts trail but I was thinking. First I had to make the stuff then I sat on the stall all weekend . My hourly rate would have been rather low.

Anyway, at least I now have some spending money for my trip to Melbourne next week.

Posted by Clare Smith at 2:26 AM No comments:

I had a great day today at the Whitireia Kapiti Campus which is a hub for a whole group of artists and craftspeople who are displaying their work as part of the arts trail. Tomorrow is the last day so if you are looking for something to do, come to Paraparaumu and visit us. 2 of my sale quilts have gone but I still have a pile available at very cheap prices. I would really like that shelf of the airing cupboard back!
Posted by Clare Smith at 3:38 AM 1 comment: