A few posts ago I talked about the Egyptian applique guys, the tentmakers. The film makers are at about 60% of the fees needed to make the documentary. If you were thinking of sending money please do it before it is too late. If they don't get enough pledges by the end of this month (which is a short month) the money doesn't come out of your account and the dock doesn't get made. I reckon it is worth doing and if you pledge enough you get a dvd and/or a tshirt so thats a bonus!

Here is the link again to the tentmakers.

On the weekend I drove my son and his drumkit to Auckland for the start of the university year. On Monday I got home again, had 20 mins at home then went to Nancy's embroidery ' meet the teachers ' evening where 2 of my classes sold out (we are negotiating dates for more classes).

Today we are packing

Tomorrow I fly to Christchurch with my younger son for the start of his first year at university doing engineering.

On Thursday I will fly back from Christchurch to a house with no kids.

This will be very strange. No more freezer full of bread. No more 4 baskets of washing. No more play station/magic the gathering/computer games/weird sonic art music/drums playing.

Now I need a job or I will go mad. I'm studying this year but I only have a lecture on Wednesdays at 5.30pm.

Posted by Clare Smith at 1:23 PM No comments:

Today when I used Google I accidentally ran the mouse over the picture and discovered it was celebrating Mary Leakey, the archaeologist.

Mary Leakey (6 February 1913 – 9 December 1996) was a British archaeologist and anthropologist, who discovered the first fossilized Proconsul skull, an extinct ape now believed to be ancestral to humans, and also discovered the robust Zinjanthropus skull at Olduvai Gorge. (from Wikipedia) The Google picture for today celebrates her 100th birthday, although she died in 1996.

The picture made me think about my childhood in Kenya.

In 1972 Louis Leakey and Richard Leakey came to my school (Hospital Hill School in Nairobi) and gave a talk about the different skulls they had found. It was a fascinating talk and may have been partially the reason I studied Zoology when I left school.

We had a temporary art teacher at that time called Miss Elizabeth who I think had been working on the Olduvai dig and arranged the visit. Afterwards she gave us skulls to draw, although I have no idea whether they were contemporary or ancient skulls but. I'm not sure many teachers these days would give 12 year olds human skulls to draw. 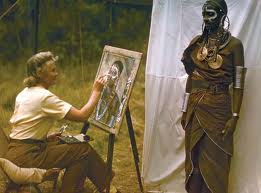 Also in 1972 my Mum took me to the Nairobi Museum for the launch of a movie about Joy Adamson and the lions, I have just googled it and it was called "Living Free', a sequel to Born Free. I remember I enjoyed the movie but was more impressed by Joy Adamson's watercolour paintings of different African tribal costumes which were hung on the walls of the Museum.

Kenya has been on my mind a bit since Saturday when the Kenyan Rugby Sevens team came so close to winning the Wellington Sevens. I don't usually watch rugby and only turned on the tv to watch a dvd,  but got hooked when I saw that Kenya was beating the New Zealand team.

Here are some pictures from the past. 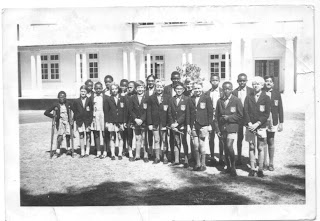 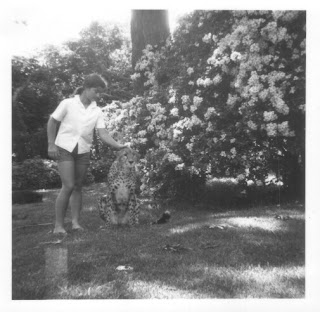 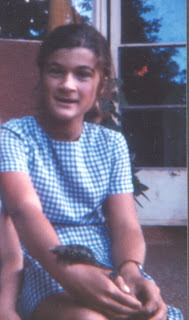 Me with pet chameleon

Now I need to go and design some quilts that are about Africa. Maybe it is time!

Posted by Clare Smith at 3:14 AM No comments:

Hi everyone
Jenny Bowker from Australia, has been working to publicise the work of the Cairo Tentmakers. They are a group of men who make amazing appliqué. I haven't seen any in person but from the pictures, I reckon they could win the hand applique prize at any NZ Symposium and apparently they cut out tiny pieces with enormous tailors shears. We used those huge shears during the Costume Construction course and I could barely open and close them, let alone cut out appliqué.

Here is what Jenny writes : 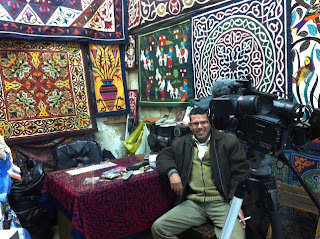 "The Tentmakers are a group of men in Cairo who make spectacular applique. Nowadays most of what they make is intended for the walls of houses or on beds, but in Pharaonic, early Islamic, and Ottoman times it was intended for the inside walls of tents. With canvas behind it which formed the outside wall, the rich appliqué glowed with light on it, and was intended to amaze visitors to a leader's tent. Did you know that Cairo was originally called Fustat - which means the big tent? In pharaonic times the tents were appliqued leather, now all the work is cotton. I think almost the best is Kim Beamish's Facebook page for the film as he is putting up constant new images, and there is a lot lot of historical input as well.
https://www.facebook.com/CharehElKhiamiah
The art has been slowly dying. Big pieces of cheap, badly registered, printed fabric made in China have poured into Cairo and people buy this rather that the real appliquéd pieces. On top of that disaster - tourism has stopped with unrest for the last two years. Without the work sold in to exhibitions that I have been arranging in other countries they would all be gone by now - instead - stitchers who left are coming back and young ones are learning again. I am thrilled with the progress we have made and very happy with the AQS who committed to them for three years. But - it is still hardly documented at all. There is not one piece in the Cairo Museum or even in the Cairo textile museum. The best article I have ever found is in the Uncoverings magazine and there are no books. Older stitchers are dying and no history has been written.

Kim Beamish is an Australian friend who - when I took him to visit the street on his third day in Cairo - picked up the baton I offered and ran with it. He is making a film about the Tentmakers in these difficult times. He has given most of five days a week for the last seven months - or more. He has paid his own way to shows in England, and has had to pay for three more that have not even happened yet in France and two in America. He has become part of the street and the men are used to him and his camera. He has two young children and a wife who works in the Australian Embassy in Cairo. They have to pay a nanny so that he is free to film. He is, like I was, a trailing spouse. He did not choose to live the 'cocktail parties and bridge' life, but has chosen to go out on a limb to tell a very moving and necessary story. I know that at the moment he is on the bones of his behind financially and simply cannot afford anything else.

The movie will not be made without funding for the essentials - the long and boring stages when the filming is done and the hard work starts. Editing, top level translation and the rest has to be done by experts and paid for. Please help. Even a little bit from a lot of people will add up to a lot - that is what crowd funding means. The link is now open and working. If he does not get to his total he gets nothing. Kim will spend the month hovering over the site and biting his fingernails.

The work is really special and the film is essential.
http://pozible.com/tentmakers - this is the link to support the Film - The Tentmakers of Chareh el Khiamiah. If Kim Beamish does not get this money the film cannot be made. Even tiny donations will help and big donations will help more. Please.
If you use PayPal it will ask you to preauthorise. It sounds odd but it simply means that when the total is reached the money will then be taken from people's accounts so it has to be done this way. Kim gets nothing if he does not reach his total and that is the way that Pozible works. He is a bit worried at the moment as only about 29 have helped in three days.
I am hoping a lot of people will have read this far and be willing now to help us. PLEASE send this on to as wide an audience as you can reach. The moment the total is reached the project will be assured. Until then it looks as if it might be dead in the water.
Thank you
Jenny"

If anyone can help by donating some money for the documentary to be made - every little bit helps. The minimum pledge is U.S$10. I just donated something and it was easy once I'd worked through the forgotten password with Paypal. It is so long since I used Paypal.
Posted by Clare Smith at 6:42 PM 1 comment: